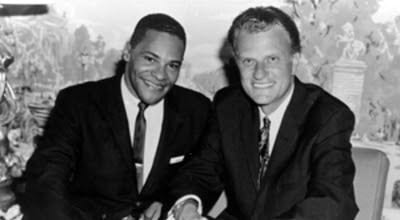 Robert Emmanuel “Bob” Harrison (LEFT) passed away March 4. He was 84.

Born January 23, 1928, in San Francisco, Harrison was a pioneer in the Assemblies of God (AG), known for paving the way for blacks to become credentialed ministers.

Throughout his ministry, Harrison continually challenged blacks to carry the cross of Christ.

Harrison enlisted in the U.S. Army and served from 1946-1947. As part of the Army band, he became a very talented musician—a skill he would later use in ministry.

Following his service, he enrolled in the San Francisco Conservatory of Music, earning a bachelor’s degree in music.

Harrison then attended Bethany Bible College (now Bethany University), receiving a certificate of theology in 1951. He was the first African-American to graduate from the school.

While attending college he met and later married Marilyn Betty Miller in 1952. Together they have five children: Keith, Carol, Adrienne, David and Stephen.

Harrison served as pastor of an Emmanuel Church in San Francisco, an independent church, since he was originally denied credentials to serve in the AG. However, through the efforts of Northern California-Nevada District Superintendent Leonard Palmer, Harrison was licensed in 1957.

In 1960, Harrison became a part of the Billy Graham Evangelistic Association and then worked in special evangelistic crusades in Africa. He also conducted gospel crusades and musical concerts in Europe, Central America, the Caribbean, Asia and the United States.

Harrison was finally granted ordination with the Assemblies of God in 1962 and approved for service under missionary appointment by the AG Foreign Missions Department (now AG World Missions) in 1964.

In Harrison’s overseas work with the AG, he held crusades in Japan, Formosa, Hong Kong, the Philippines, Singapore, British Honduras (now Belize), Jamaica and Barbados. He also ministered to thousands of American troops in Vietnam.

In 1967, Harrison spoke at the General Council in Long Beach, Calif.

In the following years, Harrison and others, working with the Division of Home Missions (now AG U.S. Missions), reached out to the African-American community through inner-city evangelism.

Harrison then became pastor of Maranatha Evangelistic Center in Portland, Oregon, in 1973.

In 1990, the National Black Fellowship was formed in the Assemblies of God, and Harrison was appointed national representative of Black Ministries.